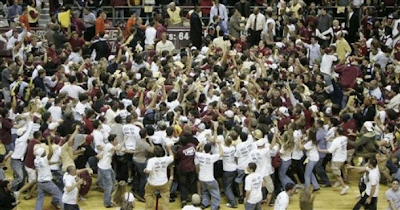 It’s already happened several times this season, and it’s bound to take place several more times before the final buzzer sounds in March. Whether it be a buzzer-beating miracle or just a good old fashioned whippin’, college basketball inevitably turns out several unexpected upsets every year.

For coaches, making sure their team doesn’t fall prey to the underdog is often a delicate balance, particularly during the pre-conference schedule.

For one, it’s difficult for players to ‘get up’ for game after game, particularly when the opponent features a directional-type name. Second (and unlike the normal Wednesday-Saturday Big 12 schedule), games center around preseason tournaments and random clusters where teams can play three or four games in a week (see the A&M men’s Saturday-Monday-Wednesday-Saturday schedule this week).

Already this season on the men’s side, we’ve seen Western Kentucky over No. 3 Louisville, Cleveland State over No. 11 Syracuse, Arizona over No. 4 Gonzaga, Michigan over No. 4 UCLA and Maryland over No. 5 Michigan State, just to name a few.

In the Aggies’ case, a slip-up to Tulsa at the South Padre Invitational is the team’s only blemish, but a few games this week were surprisingly tight coming down the stretch. Wins against Florida A&M and SMU this week have finished as 10 point victories, but both were one possession games late in the second half.

Throw studying for finals into the mix, and December can be a dicey proposition for hoops teams everywhere.

“That’s a tough stretch for you to keep your kids (focused),” said A&M coach Mark Turgeon. “Seven or eight days off in between games (during finals), you see teams that are rusty and don’t play quite as well. Then, we’re cramming four games in eight days, and it’s hard to get up for every game.”

“And there are a lot of really good players out there. There are those elite teams that have the best players, and then the rest of us. There’s a fine line between our talent. You have to be ready to play every night.”

While parity hasn’t taken hold on the women’s side as much as it has for the men, that hasn’t stopped a couple big-time upsets from stealing the headlines so far this year. We’re nowhere near March, but the madness has clearly already begun.

Those scores should send a shiver down spines across College Station. A&M hosts TCU this Sunday at Reed Arena, when the Aggies will try to avoid becoming TCU’s third top-five casualty.

Thus far, Gary Blair’s squad has taken care of business, picking up road wins at Michigan, Arizona, Pepperdine and Stephen F. Austin. In home games against Mercer, SMU and Texas State, A&M has cruised to an average victory of almost 40 points per game. In those possible upset-type contests, the Aggies have jumped out early and carried a hefty double-digit lead throughout the second half.

“Don’t put yourself in a position to allow a 60-footer or a referees call at the end of the game (to sink you),” Blair said. “You better take care of your home court. Sometimes, you give credit to your opponent. They didn’t just get off the truck; they can be pretty good.”

That’s certainly what Blair is expecting when TCU visits this weekend. A&M players said Tuesday they had already received a scouting report on the Horned Frogs, something that usually doesn’t happen until the day before a game. A&M and TCU have played in each of the last two seasons, with TCU claiming a win in the NCAA Tournament in 2006 and the Aggies returning the favor in Fort Worth last year.

“This will only be our second game against a top 25 team,” Blair said. “It will be good for us.”

That is, as long as A&M doesn’t become another statistic in the early-season upset parade.
Posted by True Brown at 9:19 AM

What needs to happen is self motivated training during the off season. any of the gyms in College Station, would be happy to help our aggies get better. I know how hard those boys work but maybe a different kind of training is what they need.