BEHIND THE SCENES: Schwarz Steps Off For Aggie Band, Steps Up For Women's Basketball

Nathan Schwarz vividly remembers one of his first up-close-and-personal encounters with the Aggie Band. Early in his high school career, the youngster from China Springs, Texas, took a family trip to College Station, where Nathan’s sister, Rebecca, Class of 2006, would soon be attending college.

Nathan wasn’t a complete stranger to Aggieland prior to that visit several years ago (his father, Duane, was Class of 1982 and a member of the Aggie Band), but he stared in awe as he watched the band form up on the Quad and begin it’s regular pre-game march to Kyle Field. Nathan, who played in his high school band, took it all in as he followed closely behind.

“He said the hair on his arm was raised (as he watched the band),” said Kim from the family’s home in China Springs, located a few minutes northwest of Waco. “He followed them out before the game, and he said ‘That’s what I’m going to do.’ From that day on, we knew he was definitely going to be in the band.”

What the family didn’t know that day was how much more Schwarz would accomplish once he arrived at Texas A&M.

Instead of following, Schwarz, a senior kinesiology major, now helps lead the Aggie Band out during every halftime performance as a member of the bugle ranks. In addition to stepping off on Kyle Field, he also plays a big role across Wellborn Road, where Schwarz is a key component of “The Guy’s,” the group of male students who work out daily with the women’s basketball team.

His role with the practice squad for the last two years may be one of Schwarz’s most important duties on campus, as the Aggies have been ranked in the top 10 in both seasons. Schwarz is a left-handed point guard who operates the scout team with precision, and the role he plays isn’t lost on head coach Gary Blair.

“He gives us the look that we have to have, particularly this year because we don’t have many point guards,” Blair said. “He’s exactly the right size, about 5-foot-9, and he has a great personality. He can go in there and get (elbowed by) Micheaux like many of our players have, and he just gets up, doesn’t say anything and plays hard on the next play.

“He has helped us more than any men’s practice player I have ever had. He may be the ultimate 12th Man.”

The humble Schwarz discounts that idea, but his job on the men’s practice team says a lot about the type of person he is. Team members are held to the same grade requirements as Blair’s players, which means they have to be in good academic standing and enrolled in at least 12 hours every semester.

This semester, Schwarz makes the trek to Reed Arena four days a week for practice, which means showing up around 1 p.m. and leaving sometime after 4, not a simple task when you consider he’s also enrolled in 16 credit hours and has several daily obligations with the Corps of Cadets. All he receives for his time with the team is a pair of shoes, said Blair.

But, it’s all in a day’s work for Schwarz, who also serves as A-Company’s athletics officer and helps schedule the group’s intramural teams.

“I like coming out here and knowing I’m making them better,” Schwarz said. “Last year when they made it to the Elite Eight, it felt really good to know that I had a behind-the-scenes part in that. I like being a quiet helper and coming out here to practice with them and help them get better every day. That’s the best reward, watching them play and watching them win—I feel like I’m doing my job out here with them.” 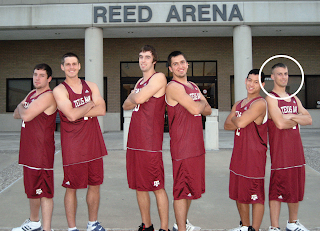 In addition to countless hours at practice, Schwarz is a regular in the crowd at the team’s games.

“ I know they’re always struggling with attendance, so I want to do my part in practice and in the stands. (The team) started getting better right when I started school, so it’s been easy to come out and watch. I enjoy going to any sport, and it’s always good to support another Aggie team.”

Between his time toiling away during basketball practice and his hundreds of hours spent drilling and performing with the Aggie Band, his support for Aggie Athletics may not be surpassed by any student on campus.

Schwarz is set to graduate in August, but he plans to apply to graduate school at A&M and work toward being a strength and conditioning coach after that. His last halftime performance on Kyle Field was at the Oklahoma game on Nov. 8, but he’ll be eligible to work with the basketball team through the end of the season.

His parents, meanwhile, can’t help but to smile when they contemplate everything Nathan has done. The Schwarz’s haven’t missed a home football game since Nathan joined the band. Kim said they haven’t made it to any basketball practices yet, but her son has said they are welcome to come down and watch any time.

“It’s a pretty neat thing,” Kim said. “There are only 12 other moms this year who can say they have a son in the bugle ranks. We’re pretty proud of all his accomplishments. A couple of weeks ago, the basketball team presented him with a Benjamin Knox painting and told him how much they appreciated him. It was the Friday before the last football game, and they told him good luck on his last march. (That made him feel like) he was doing something right, and he was very proud of that. That means a lot to us.”
Posted by True Brown at 11:47 AM