The following in as in-depth look at the meteoric rise of the Texas A&M women’s basketball program. This 12th Man Foundation exclusive is the last in a four-part series, which originally appeared in the January issue of 12th Man Magazine. 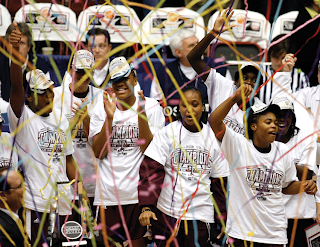 ELITE EIGHT AND THE FUTURE

By the time A’Quonesia Franklin, Morenike Atunrase and Patrice Reado had reached their senior seasons, the secret was out about Texas A&M. The Aggies opened the year a school-record 11th in The Associated Press poll, and the league coaches responded by predicting another conference crown for Gary Blair’s bunch.

After an early Big 12 season swoon (four losses in the first five games) threatened to derail their season, the Aggies responded with one of the best closing runs ever put together by an A&M team. Blair issued a challenge to his seniors that their careers would soon be over if they didn’t pick things up in a hurry.

The team quickly pushed their record to 5-4 and then exploded after a road loss at top-10 Oklahoma. In the final six regular season games, no opponent scored more than 59 points against the Aggies suddenly overwhelming defense. A&M piled up an average margin of victory of 14 points in the final six regular season games, and, in case anyone had counted the team out, proved their mettle by wrapping the season with convincing decisions over No. 17 Oklahoma State, No. 8 Baylor and No. 10 Oklahoma.

The swagger was back, and three more wins in the Big 12 Tournament meant the team had made good on the preseason prognostications. A&M players and coaches celebrated the school’s first-ever Big 12 Tournament title in style as streamers and confetti fell in after the Aggies won a classic in the finals against Oklahoma State.

The selection committee took notice, seeding A&M second in the upcoming NCAA Tournament. Two more dominating wins by an average of 31.5 points sent the Aggies to the Sweet 16. There, they crunched big-talking Duke to mark the first Elite Eight appearance in school history.

True to form, A&M sucked high-flying Tennessee into a grind-it-out slugfest. Despite holding a five-point advantage with 6:17 to play, the Lady Vols eventually wore down the Aggies. Tennessee picked up a 53-45 win and won their eighth national title one week later.

By the time the dust settled, it almost seemed appropriate the most dominant program in women’s college basketball had eliminated the Aggies. It was coach Pat Summitt and her dozen McDonald’s All-Americans versus Gary Blair and his band of scrappers, who had clawed the A&M program out from basketball purgatory and fought for every bit of credibility it had earned. It certainly wasn’t an official changing of the guard, but it loudly announced that the Aggies wouldn’t back down from any opponent.

After a record 29 wins last year, the team has already set another school record this season, ascending to a No. 3 national ranking and finishing non-conference play with a 13-1 mark. The Aggies currently sit at 16-3 (4-2 Big 12) after smashing top-20 Texas in Austin on Wednesday night.

“It’s probably as impressive of a turnaround in as quick a time as I’ve ever seen, and I’ve been covering women’s basketball for more than 20 years,” said ESPN.com writer Mechelle Voepel, a 20-year veteran of writing about women’s basketball. “It’s not just because of how well they’re doing now. When you put it in perspective of how much the program was an non-factor just in the Big 12 South—they really had a lot of ladders to climb.”

Recruiting has continued to pick up, and the most recent signing class included four players all ranked in the national top 100, and the coaching staff still has an open scholarship spot to fill. Add that to the recent signings of junior college All-American Tanisha Smith and McDonald’s All-American Tyra White and A&M certainly appears to have some staying power.

Further, Reed Arena has seen an almost 340 percent increase in attendance from 2003 to the current season, which is sure to grow after Big 12 play brings larger crowds. Fans are even showing up in droves at road games to support the team.

“Our first (non-conference) tournament we ever played after we came here was at Boston College, and we didn’t have a single parent or fan go with us,” remembered Blair. “We offered the tour to the Maroon Club and not a single person went. Now, people are lining up to go with us.

“When we go on the road, the Aggie clubs and Aggies everywhere come to see us play. We’re really starting to bring a following of fans who live in the area, and that’s fun.”

The team is slated to see plenty more exposure as Big 12 play progresses this year. Six of their league games are scheduled for television, with the highlight being the ESPN2 Big Monday home game with Oklahoma on Feb. 23.

The Big 12 received high marks through the early portion of the regular season, with seven teams in the top 25 of the ESPN/USA Today Coaches Poll. Four of those (Oklahoma, Baylor, A&M and Texas) were in the top 12 as recently as two weeks ago, making the league perhaps the most top-heavy it’s ever been. The big difference these days, though, is that the Aggies are squarely in the mix of deciding who will be the conference’s top team for the foreseeable future.

And as is the case in so many sports, if you can win a Big 12 championship, then you can compete for a NCAA championship.

Which brings the story back to Lubbock (see Part One from Tuesday). The bane of so many A&M sports teams may again play a pivotal role in the women’s basketball team’s resurgence. This year, Texas Tech will be hosting first and second round NCAA Tournament games. Since it’s the closest host site to many Big 12 schools, it seems logical that the league’s best squad will be rewarded with the relatively short trek west.

Only time will tell if it will be the Aggies.

This much is certain, however: It once seemed laughable that A&M could contend for and win a Big 12 title. The Aggies have done that twice, so could the greatest prize in women’s college basketball be in the school’s future? The mere thought of that would have been considered lunacy six years ago, but it doesn’t seem so far-fetched now.

“National titles are hard to come by, and they don’t come easy,” said former assistant media relations director Steve Miller. “Will they win a national title? Yeah, they just might do it. But, if they don’t, I guarantee you they’ll have played for it or been in a Final Four. Everything is in place. The right coaches are here, the right players are here, and the fans are coming out in greater numbers every game. Why not Texas A&M?”
Posted by True Brown at 7:24 AM