The following in as in-depth look at the meteoric rise of the Texas A&M women’s basketball program. This 12th Man Foundation exclusive is the second in a four-part series, which will continue through Friday. The story originally appeared in the January issue of 12th Man Magazine. 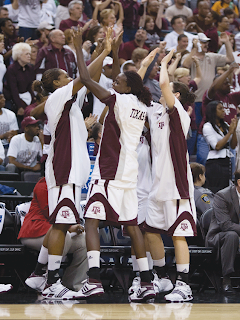 In many aspects, Gary Blair may have been the perfect hire for Texas A&M. Blair came to Aggieland after 10 years at the helm of the Arkansas program, where his 1997-98 team entered the NCAA Tournament as an unranked 9-seed but shocked the nation by advancing to the Final Four. Prior to Arkansas, the Dallas-native led Stephen F. Austin to a 210-43 record in eight seasons, winning seven consecutive conference championships along the way.

He also knew the state of Texas inside and out, having coached Dallas South Oak Cliff High School to three Class 4A state titles and a runner-up finish during one four-year stretch.

For Blair, it was all about timing.

“But, if I would have had it 20 years ago, they might not have been committed, and I might would have been fired like everybody else. But, when I came in the right administration was in place in Bill Byrne.”

Upon arriving in College Station, one of Blair’s top priorities was assembling a coaching staff. The first to join Blair was assistant coach and recruiting dynamo Kelly Bond. Bond, a Chicago native, had made her name as a stellar recruiter under Blair for the previous three seasons at Arkansas.

Next up was Vic Schaefer, another Texas native who also happened to be an A&M graduate (Class of 1984). More than that, though, Schaefer had worked with Blair for six years at Arkansas after several years in direct competition with him at Sam Houston State, where Schaefer coached from 1990-97.

One of Blair’s best recruiting jobs may have been convincing Schaefer to follow him to A&M. Schaefer interviewed for the head coaching job at New Mexico State after Arkansas officials said they weren’t interested in promoting him. After an interview in Las Cruces, N.M., it became clear that Schaefer was New Mexico State’s No. 1 choice.

“I told (Blair) it was my time to be a head coach,” Schaefer recalled. “That was something we had talked about when I came to Arkansas, so we were open about that from the get-go.”

Still, Blair wouldn’t take ‘no’ for an answer. While Schaefer and New Mexico State tried to hash out an agreement, Blair made one more phone call.

“Coach said, ‘There’s two tickets at the American Airlines counter at the airport in Fayetteville. Just bring (your wife) Holly down. You’re not doing anything else, so just come on down,’” Schaeffer said. “We did, and I can remember getting up in church later that week and telling Holly that I was going to go call the athletic director at New Mexico State. She said, ‘So you’re going to take the job?’ I said, ‘Nope, we’re going to A&M.’”

With Schaefer and Bond in the fold, Blair’s staff turned its attention to recruiting. A&M inked a pair of junior college transfers, but even with the two experienced additions Blair’s first team was dangerously thin. The glaring exception to that was senior point guard Toccara Williams, who would later play in the WNBA after a sparkling final year under the new coaching staff.

As the Aggies prepared for the 2003-04 season, Blair had long since begun his own grassroots effort to drum up fan support. Considering the average crowd that attended a game during Gillom’s final season was a paltry 1,403, he more than had his work cut out for him. 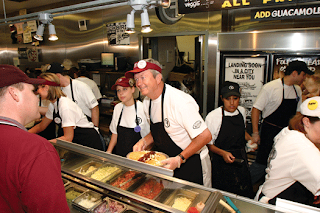 Blair joined the local Rotary Club and became a familiar face in the community, talking to student groups, neighborhood associations, charity groups—basically anyone who would listen. He even went door-to-door in his own neighborhood to introduce himself and give away tickets.

“ (Before Blair arrived) we always joked that at Reed Arena, every game was a maroon out—not because people were there but because all the seats were maroon,” said Steve Miller, the team’s former sports information director, who now works in event management for the athletic department. “He was (and still is) notorious for carrying 25 or 30 tickets with him in his back pocket. He will call up radio stations and say ‘Hey, it’s coach Blair. I’m at the gas station at the corner of Texas and University; I’ve got free tickets for the first five people that stop by.’

“He’s notorious for not using drive-thru windows. He wants to go in because he figures he’ll run into some people he can invite to his games. The worst that can happen is they’ll leave with a free ticket.”

His persistence paid off immediately.

Opening night at Reed Arena his first year set a first-night record when 1,802 fans showed up to see the Aggies upend Arkansas-Little Rock. Attendance numbers the rest of the season remained solid by A&M standards. The Texas game drew 4,336, while the Baylor game crowd of 5,565 set a Reed Arena record.

Those who showed up were treated to some special games, as well. While the team ultimately finished with a 9-19 (2-14 Big 12) record, the only losing season in Blair’s career, the Aggies were dangerously close to shocking the league on a number of occasions. In addition to the aforementioned “put the league on notice” game in Lubbock, there were a stunning amount of near-misses against the premier teams of the conference:

— An overtime loss to No. 15 Oklahoma, despite holding a 13-point second half lead

— Another 59-58 loss, this time to No. 8 Kansas State who eventually finished conference play with a 14-2 record

Despite being severely undermanned, A&M had been nail-bitingly close to doing the unthinkable at almost every opportunity.

“That team was the most fun I’ve ever had in coaching,” recalled Schaefer. “They absolutely played their guts out. We got blown out in one game, but other than that, we were in every single other basketball game in the Big 12. We gave everybody fits.

“When (former legendary Longhorns coach) Jody Conradt shakes your hand after a ballgame and says ‘I’d rather go to the dentist than play you guys,’ that’s a compliment. I felt like we played that way every night.”