I Hope Stephen McGee Gets A Shot 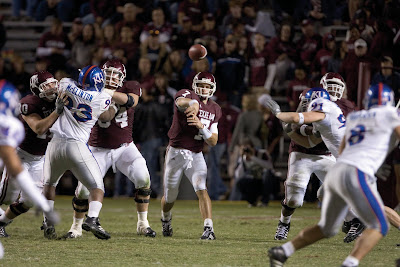 Randy Riggs had a very good story about former Texas A&M quarterback Stephen McGee in the Tuesday edition of the Austin American-Statesman, and it’s a piece every Aggie football fan should read. You can read it by clicking HERE.

There are a few things to take from this well-written story:

1. By all accounts, McGee will get a chance to prove his worth with an NFL franchise. Considering all the debate during the 2008 season about whether or not he would be drafted, McGee has rehabbed his way past a tough shoulder injury and into draft position. That’s good to see, as McGee’s pedestrian passing stats in college were hampered by three years of option football.

2. McGee is mature beyond his years. Time is at a premium for big-time Division I athletes, and the fact that McGee has been a dedicated teammate and will finish his time in College Station with TWO degrees is truly remarkable. One quote in particular from today’s story really stands out. In discussing his up-and-down college career, McGee said: “I could have been in an offense that showcased my talents more. But the ability to play unselfishly and lay my best interests aside for the good of the team taught me something so much more than just having great numbers and winning trophies…One day I’ll be a better father, husband, teammate and person for having gone through all these things. In the big scheme of things, you don’t want to trade anything for that.” This is not a common individual.

3. McGee may be the most competitive person on the Texas A&M campus. Coaches have always raved about his level of play and attention to detail in practice, and few (if any) work harder in the weight room. And, as if McGee needed any further inspiration to get a shot in the league, he revealed in this story that he keeps a file of all the skeptical comments and jokes people have made about his over the years. He refers to the list when he thinks about easing up his workouts or not pushing through another sprint.

I got a taste of McGee’s competitive nature very early in his college career. Former A&M o-lineman Geoff Hangartner (now with the Buffalo Bills) always used to make a freshman lineman carry his pads out to practice during two-a-days. After McGee graduated from high school early in 2004 to take part in A&M’s spring drills, Hangartner reasoned that since McGee wanted to get to college so bad, he must also want to lug Hangartner’s pads to the practice field. Naturally, McGee disagreed.

The two decided to settle it on the golf course and invited myself and former 12th Man Magazine On Campus staffer Dallas Shipp along to referee. The two were deadlocked after 17 holes, but both players crushed long drives down the middle of the fairway on 18.

By this time, Hangartner was getting desperate. As McGee began to swing for his approach shot, Hangartner bellowed out a deafening ‘Gig em Aggies’ yell, and McGee’s shot soared far from the green. The fury in McGee’s eyes had us non football players backing up, afraid we were about to be reffing a boxing match instead of a friendly round of golf.

Hangartner finished with an 81 to beat out McGee’s 83, and the post round handshakes didn’t feature much eye contact or pleasant conversation for McGee. He was clearly not pleased by Hangartner’s successful (albeit questionable) distraction.

Some five years later, it’s good to see that same competitive spirit is helping push McGee into the NFL. Here’s hoping he gets a fair shake this go round.
Posted by True Brown at 7:56 AM

I couldn’t agree more, McGee is the ultimate role model.
I use to get furious when I would read those idiots on texags, who obviously never played an organized sport of any kind, make negative remarks about Stephen.
If you are a true Aggie, how could you say anything negative about a guy who gives 300% effort in everything he does. I’m glad to see that he has used that negativity to help fuel his fire.
I hope Stephen realizes those critics are the un-silent minority. Everyone I know loves Stephen and has always been in his corner. Fortunately, I don’t run with the un-silent minority (AKA: idiots!)