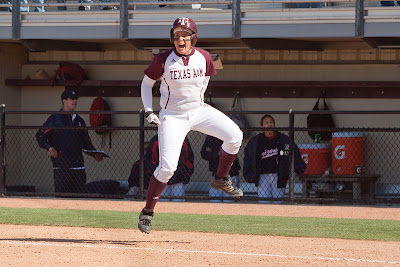 Erin Glasco looks right at home as she casually navigates the comfy confines of the Texas A&M softball team’s player’s lounge. She light-heartedly jokes with teammates and staffers as she bounces between computer consoles, plush leather couches and the locker room. It’s evident Glasco is in an ideal setting as the easy-going senior transfer from Johnston City, Ill., laughs with the ease of a person who has spent the last 18 years with her teammates rather than the last 18 months.

The Aggies are in the midst of their conference schedule—a grueling 10-week span that demands the utmost in focus and determination from players and coaches. As Glasco discusses the nuances of some upcoming games, as well as the challenges of being a leader on the team for the first time, she gently touches a tattoo on the inside of her right wrist. The ink depicts a large pink ribbon outlined in black.

Glasco’s smile briefly ceases for what is likely the first time all day when she’s asked about it.

“Yeah, this is new; it just happened,” she said, recalling the Tuesday in March that led to her new artwork. “My mom called me the Tuesday after our spring break and said, ‘I’ve got some bad news. I don’t want you to worry about me, and it’s not a big deal…I just have breast cancer.’”

Vickie Glasco’s statement hung in the air as Erin took in the words she had just heard on the telephone. Erin’s immediate reaction was the natural one—tears, fear, concern and uncertainty. For a mother and daughter who consider themselves to be best friends, Vickie’s diagnosis was difficult to comprehend. Erin skipped practice that day and tried to gather her thoughts as the team prepared for a weekend series against Nebraska.

As the middle daughter in a softball-crazy family of five (Erin’s father, Gerry, is an assistant coach at Georgia), Glasco knew her mother would want her to play against the Huskers. It helped that Vickie, who rarely misses one of her daughter’s games, was scheduled to be in College Station to watch both contests. Erin hasn’t missed a game in her two seasons at A&M, and despite the devastating news about her mother, never questioned whether she’d be behind the plate the following weekend. Rather, she said she drew strength from her mother’s ever-positive attitude.

“I got this (tattoo) to remind me that if my mom can get through this, I can suck it up and play softball and focus on what I need to do,” Glasco said.

After Vickie’s diagnosis, doctors immediately scheduled her for a surgery the following Tuesday. Before she worried about that, however, Vickie boarded a Texas-bound plane so she could be in the stands for the Aggies’ Big 12 opener. Erin reached base in all three at-bats that Saturday afternoon, and A&M claimed a 2-1 victory at the Aggie Softball Complex.

Some 72 hours later, Vickie was in the hospital for surgery. Doctors removed the lump and quickly gave the family the good news that the cancer had not spread.

“A lot of my positive attitude (before the surgery) had to do with how my grandmother and mother responded,” said Vickie Glasco, who pointed out that she represents the third consecutive generation in her family to be diagnosed with breast cancer. “I stayed positive because of my kids, too. I wanted them to feel like everything would be OK. It broke my heart to have to tell Erin about (the cancer). It caught her completely off guard, and she didn’t know quite what to do with it.

“You couldn’t believe how good I’m doing now, though. It turned out to be the best scenario, because we caught it early before it could spread to my arms or lymph nodes. I’m a very, very lucky person.”

Vickie’s good news gave everyone in the extended Glasco family, including those involved with A&M softball, reason to celebrate. Erin said her teammates and coaches helped carry her through the difficult hours and days after her mother’s diagnosis. That’s no surprise to those who have spent time around coach Jo Evans’ team, where the Aggie coaching staff and players readily talk about how close they are as a group.

The Aggies’ clubhouse atmosphere has been a particularly welcome environment for Glasco, who was recruited heavily by A&M and Notre Dame out of high school.

She eventually signed with the Irish, but her first two years in South Bend didn’t go exactly as planned. She made 39 starts her sophomore season but didn’t quite mesh with the coaching staff. As the 2007 season came to a close, Glasco decided she wanted to transfer.

Meanwhile, the Aggies finished their year by advancing to the Women’s College World Series for the first time in nearly 20 seasons. In the team’s first game in Oklahoma City, however, a speedy Tennessee team set a WCWS record by stealing five bases against the Aggies. A&M lost its only two games in Oklahoma City, and Evans immediately started scouring the country for a new catcher.

Evans’ eyes brightened when she learned Notre Dame had released Glasco, and she welcomed the hard-nosed catcher from Illinois into the program with open arms.

Glasco’s impact on the program was immediate. She gave A&M a dependable everyday starter behind the plate. Her statistics also improved greatly. In her final season at Notre Dame, Glasco hit .200 with nine RBIs, two doubles and a single home run. In her debut season in Aggieland, Glasco upped her batting average to .280, hit 12 doubles and drove in 29 runs.

In the field, she caught 64 of A&M’s 67 games, committed zero errors and provided former pitching star Megan Gibson with a reliable target. The Aggies soared through the season and won both the Big 12’s regular season and tournament titles. By the time the Women’s College World Series came back around, the Aggies had won 15 in a row and were considered one of the most dangerous team in the nation.

“Last year, so much attention was given to Megan Gibson, Jamie Hinshaw and Jami Lobpries in that great senior class, and deservedly so,” Evans said. “But, I will tell you that if we didn’t have Erin Glasco, we wouldn’t have been playing for the national championship. We noticed her every day.”

As important as she was during last season’s magical run, Glasco may be even more needed this season. She’s one of two senior starters on A&M’s youthful roster. Considering the team’s two most used pitchers are a freshman and a sophomore, Glasco’s steadying hand behind the plate is a necessity if the Aggies want to experience another successful postseason.

“(Being a senior leader) is harder than I ever thought it would be,” Glasco said. “There is a pressure to set an example through your actions every day, and sometimes when you put so much pressure on yourself, you can’t perform because you are trying so hard. Sometimes, it is hard to sit back and trust the process that we are taking, but that is one thing that coach Evans is great at. She is good at calming people down and saying, ‘Hey, it’s all right. We’re going to get there.’ But, I am definitely the most comfortable I have ever been behind the plate.”

Glasco has certainly won over her teammates with her play, and her easygoing nature off the field makes for easy interactions around the clubhouse.

She has certainly made a believer out of Evans.

“I could talk about Erin forever,” Evans said. “She is so blue-collar, and you will not find anybody more hard-nosed playing the game. If I was a fan—and I am a fan of hers—but if I was a fan in the stands, I would pick her as the one that I always pulled for. She’s one of the best team players, and she’s somebody that everyone should pull for because her intentions are absolutely where they should be.”
Posted by True Brown at 12:36 PM