"Hey, Coach G, can I have your autograph?" 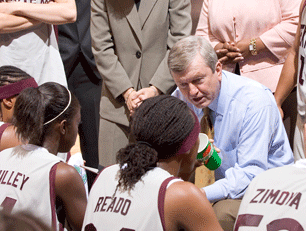 Women’s basketball coach Gary Blair is always working. Whether he’s dissecting film in his office, toting a whistle on the practice court or taking in other sporting events across campus, Blair’s brain is constantly going.

As the coach of a team that has traditionally struggled to pack the stands, Blair is particularly interested in watching what unfolds right across the street from Reed Arena. He’s attended several A&M soccer games this year—and he doesn’t do it just to get out in the sunshine and relax.

“A lot of people think I am just going to games to fill out my 12th Man Team Rewards card,” said Blair earlier this week. “I go to the games to study marketing and study coaching.”

There’s a lot he can learn from Guerrieri, who has built one of the most rabid soccer fan bases in the country. The Aggies averaged 3,538 fans in 11 home games this year and are routinely in the top two or three in national attendance. Blair has certainly done his part to help pad the team’s numbers. (Seriously. A quick search at http://sports.tamu.edu/12thManTeam/leaderboard.php confirms Blair is one of the top event-attenders in the athletic department.)

“When I first got here, the two people I really admired the most on promoting their sports were Tim Cass in men’s tennis and G Guerrieri,” Blair said. “I took a little bit from each of those because those are sports where it’s (traditionally) hard to draw people in. I tried to bring some of my marketing ideas and incorporate them with what (Cass and Guerrieri) were doing, as well. I learned from everybody.”

The similarities don’t stop there. The product Blair has put on the court is certainly worthy of drawing inordinately large crowds like soccer. The Aggies rolled to the Elite Eight last year and set a school record with 29 wins.

His success on the court has allowed A&M to open its recruiting beyond state borders. In fact, last week’s signing class included highly-ranked players from Oklahoma, Louisiana, Tennessee and California—and none from Texas.

“Coach Guerrieri hit that road about his fourth or fifth year here, where he could go in and recruit just about anywhere in the country,” said Blair, now in his sixth season at A&M. “We’re almost at that point.”

That’s good news if you’re an Aggie fan. Blair’s squad may soon find itself in a situation similar to Guerrieri’s: an almost permanent fixture in the national top 10.
Posted by True Brown at 12:22 PM