An Open Letter To Stephen McGee 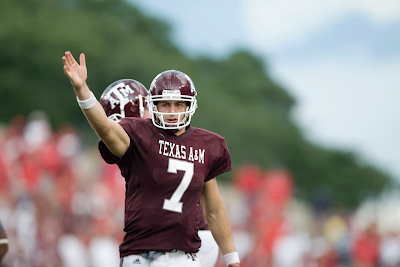 Let me start by saying that I hate the way this season has turned out for you. For a guy who has left it all on the field for the Aggies in the previous two-and-a-half seasons, getting hurt against New Mexico in game two obviously wasn’t what you had in mind while you were playing with precision during summer practices.

But, if I know anything about you and the kind of guy you are, you took it all in stride—the injury, the criticisms and the less-than-complimentary jabs sent your way by faceless message board posters. I say that because nobody has been a better team player than you in the last few years, so when Jerrod Johnson came off the bench to throw for three touchdowns I know you were happy because the Aggies won.

You also gave all Aggies fans plenty of reasons to be happy during your career. And since it’s Texas week, this is the perfect time to bring up a couple of those magical moments.

You almost did the impossible in 2005 when the juggernaut Longhorns rolled into Kyle Field. It had been more than a month since A&M had won a game, but former coach Dennis Franchione awarded you with your first start that Friday afternoon. The Horns jumped on top early, but you persevered, absorbed crushing hit after crushing hit, and had your team in contention for what would have been one of the biggest upsets in rivalry history. I guarantee you that nobody in the stadium will ever forget the sequence when you scored a touchdown one play after almost getting your head knocked off:
http://www.youtube.com/watch?v=yJJEyyZadJQ

What you didn’t quite accomplish that day was more than made up for the following year in Austin. That year, the Longhorns were one win away from playing for the Big 12 South title, but you guys kept their high-powered offense off the field with your clock-eating drives. I vividly remember that fourth-quarter, game-winning drive from my seat in the end zone at DKR…you and Jorvorskie Lane battered their defensive backs to convert third down after third down, the final one which resulted in an 8-yard TD run. I still have that game saved on my TiVo, and that final drive still gives me goose bumps. (Maybe you can show it to the team before the game on Thursday—there are some good highlights at:
http://www.youtube.com/watch?v=ciUGJSTjGTc)

After you beat them on the ground in 2006, last year’s game at Kyle Field was an all-out aerial assault. While speculation about Franchione dominated the pre-game headlines, the post-game story was all about how the unheralded Aggies sliced and diced another stellar Texas defense, shredding them to the tune of 362 passing yards and three touchdowns. The double-lasso dance was particularly impressive:
http://www.youtube.com/watch?v=owbnpqtVHmQ

The coaches aren’t saying whether or not you’re going to get one last chance to suit up in this game, but I guarantee you the last person the Texas coaches want to see out on the field Thursday night is a guy in a white jersey with a maroon No. 7 across his chest. They should be scared, too, because you’ve outfought, out-gutted and out-hearted their whole team in the last two years.

Fortune hasn’t been kind to you this year; yet, all along the way you’ve been a stand-up guy who has handled the hardship with true character and resolve. Because of that, I sincerely hope you get one more opportunity to take the field against the hated Horns.

Thanks for representing our school with so much heart. You make me proud to be an Aggie,