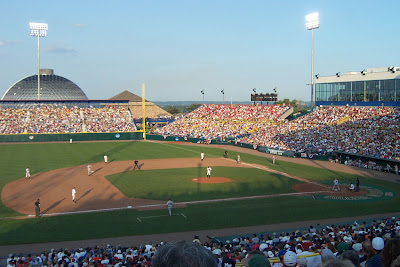 Twenty years ago this month, one of the best Texas A&M baseball teams in school history began a remarkable run to No. 1. Ten years later, another great A&M team began a memorable and magical journey to Omaha.

This year, the Aggies will mark those anniversaries by fielding what could be the school’s best team ever.

Seriously folks. The 2009 Aggies are not merely capable of making it to the College World Series; they are capable of dog-piling on the spongy infield grass of Rosenblatt Stadium and painting Omaha maroon.

Repeat after me: The Aggies are legitimate national title contenders.

That sounds sweeter than a double butterscotch milkshake at Zesto’s, the famous dairy-whip stand across from the parking lot of Rosenblatt.

The current team will probably not produce outlandish offensive numbers of the ’89 or ’99 squads. The ’89 Aggies, for example, scored 635 runs—119 more than last year’s solid offensive team. And the ’99 Aggies blasted 125 home runs—37 more than any other team in school history.

Led by centerfielder Kyle Colligan and first baseman Luke Anders, the 2009 Aggies appear to be an extremely solid offensive team that will test and torment opponents. Brodie Greene, Kevin Gonzalez, Nick Fleece and Nick Anders will also provide plenty of firepower for third base coach Matt Deggs, who specializes in creating chaos on the base paths and forcing foes into mistakes.

It should be a productive and entertaining offense. But offense is not the reason that this team will start the season ranked No. 1 nationally by Baseball America. Unlike the ’89 and ’99 teams, these Aggies are not built around offense.

The top three reasons this could be the best team in country and the best in A&M history are:

Last year, the Aggies won 46 games. This year, A&M returns pitchers who were responsible for 41 of those victories—89 percent of them.

Then there are youngsters like freshmen Denny Clement and Ross Hales, both of whom may prove to have “weekend stuff.”

The wildcard may be Alex Wilson, Baseball America’s 2006 National Freshman Pitcher of the Year at Winthrop. Wilson turned down a significant, six-figure contract offer from the Chicago Cubs last summer because he believes he can be better than a 10th-round draft pick. He also believes this team has national title talent.

Wilson dazzled scouts in the Cape Cod League last summer with his 98 mph fastball. He’s also proven in tough venues. He baffled some of the best teams in college baseball as a true freshman in 2006, beating nationally ranked Miami, Alabama, Clemson and Coastal Carolina on their home fields.

But here’s the true indication of just how good the A&M staff is in 2009: Wilson is not a lock to be a weekend starter.

“When you look at it on paper, the rotation that Coach (Rob) Childress has put together is really amazing,” said former A&M pitcher Mark Thurmond. “They obviously have to go out and prove that they are as good as they look on paper, but based on what I know, I think it could very well be the deepest pitching staff we’ve ever had.”

Thurmond was an anchor on an amazing staff in the late 1970s. He and teammate Mark Ross still hold the record for most career wins at A&M with 34 each from 1976-79. Thurmond, who would go on to start the first game of the 1984 World Series for the San Diego Padres, also holds A&M records for most career shutouts (11), lowest career conference ERA (1.61) and most complete conference games in a career (20).

“Those were obviously much different times,” Thurmond said. “Back then, (former A&M head coach) Tom Chandler would hand you the ball to start the game and say, ‘I’ll see you when the game is over.’ We didn’t have the closers and situational guys that you see today. So, we were certainly not as deep as these guys are today.

“Coach Childress has done an amazing job of grooming these guys, teaching the guys how to pitch and building the entire staff. It sure looks like the kind of staff that can get you to Omaha and keep you there.”

Trey Moore, the owner of Extra Innings baseball training center off of Highway 30 in College Station, knows something about taking a team to Omaha. In 1993, Moore and Jeff Granger headlined a stellar staff that helped A&M win 53 games and make it to the CWS.

During the season, Moore went 12-0 with a 2.77 ERA, while Granger went 15-3 with a 2.62 ERA. The ’93 Aggies also featured some impressive depth behind the top two weekend starters. Kelly Wunsch went 7-2 with a 4.45 ERA, while Brian Parker, Chris Clemons and John Codrington combined for 15 more wins.

The ’93 team is the last A&M squad to win a game at the CWS. Moore says he hopes that streak comes to an end this year, and he believes this staff is capable of making its own history.

“It will be a lot easier five years from now to rate this staff against all he others in A&M’s past—once the dust has all settled and we’re able to see how they did and how far the team went,” Moore said. “But I can tell you that I believe Rob Childress has a really nice problem on his hands right now. There is going to be some serious scrutiny and competition for every inning. If someone has a bad start or two he could quickly find himself at the end of the bench.

“It remains to be seen if some of those guys can take the next step to go from good pitchers to elite pitchers. But just in terms of pure depth, this is a pretty unique situation. You can imagine a lot of possibilities with a staff like this.”

I, for one, can imagine the 2009 Aggies earning a top eight national seed, hosting a Regional and then hosting the Super Regional.

A&M has played in three Super Regionals since last making it to the College World Series in 1999. All were on the road, and they all ended in agonizing losses.

In any one of those years—2004 at LSU and 2007 and ’08 at Rice—the Aggies only needed a couple of breaks to reach Omaha. But at that time of the year and in those tension-packed moments, the home team usually receives the breaks.

Clearly, the road to Omaha is far less menacing the longer you can stay at home. And with this staff, the Aggies should have an outstanding opportunity to be a top eight national seed.

In each of those years where A&M reached the Super Regionals but failed to advance to Omaha, you can look back at losses on Sundays or weekdays that proved to be extremely costly to A&M’s national seeding.

Hopefully, that won’t be an issue this year. No matter who emerges at the top of the rotation, the Aggies will be sending weekend-caliber pitching to the mound every time they take the field.

Obviously, there are no guarantees in baseball. You can have a super staff and not even make it to the postseason. The 1990 Aggies, for example, produced a team ERA of 2.80. Rich Robertson went 10-1 with a 1.77 ERA and Kerry Freudenberg was 7-1 with a 1.51 ERA. Ronnie Allen, Pat Sweet, Jason Bullard, Brent Gilbert, Bo Siberz, Steve Hughes and Sean Lawrence all produced impressive numbers, as well.

But the ’90 Aggies couldn’t hit and dropped five of their final six games. A&M didn’t even make it to the Regional round.

That isn’t likely to happen to the 2009 team. While there are some offensive holes to fill with the departure of Dane Carter, Jose Duran and Blake Stouffer, this team is still quite explosive.

And with the depth of this staff, if the Aggies have a lead in the fifth or sixth inning, you might as well turn out the lights.

This is an extraordinary staff. It’s also quite easy to imagine this being the most exceptional season in the history of Texas A&M baseball
Posted by True Brown at 12:37 PM