High Intensity On Tap For Saturday 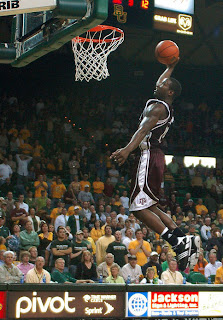 A few words of advice to anyone who has a ticket but is considering skipping out on Saturday’s A&M-Baylor basketball game: Don’t. You. Dare.

Sure, this year’s Waco version of the Battle of the Brazos appears to lack the same pizzazz and fanfare that surrounded the 2008 contest, but both teams have no choice but to bring their best games into the Farrell Center this weekend. Take an already emotional series, add in two teams scrambling for their postseason lives, plus two fan bases eager to hold bragging rights over the other until next year, and the stage is set for an all-out dogfight.

Each team certainly brought all the emotions it could muster last year. If someone had lit a fuse anywhere in the vicinity of the Ferrell Center last March, there’s a good chance the building wouldn’t be standing there today.

Last year’s powder keg began brewing during pre-game warm-ups when Baylor students ruthlessly taunted Texas A&M’s players and coaches. The hysteria nearly reached a full-fledged riot after A&M’s Donald Sloan put his emphatic stamp on the Aggie victory during the waning seconds of the game with his one-handed, throw-it-off-the-backboard slam.

In the end, though, the Aggies walked out of Waco with a big 71-57 win and an eventual spot in the NCAA Tournament. This go-round, however, includes two squads mired in a Big 12 funk. The Aggies are 3-6 in conference play while Baylor has lost six straight to fall to 3-7.

A&M claimed the early-season meeting between the two squads with an 84-73 victory—certainly not the five OT affair the two had in College Station last year—and neither fan base appears particularly giddy about Saturday’s 5 p.m. game.

Since 2004, though, A&M and Baylor have waged some classics. Each game in Waco has come down to the final moments, catapulting this into perhaps the most under-rated rivalry in the Big 12.

Indeed, the Ferrell Center will be hopping on Saturday, particularly in the wake of last year’s uber-intense Sloan-dow—err showdown.

Anyone who expects Saturday’s game to be more pillow fight than slugfest should look no further than January’s meeting at Reed Arena. Baylor entered with a 13-2 record, but A&M took it to the Bears early and often in a game that featured its share of hard fouls and tough play. And, with both squads currently in full-on scramble mode, all signs point to a no-holds-barred showdown on tap Saturday.

Sloan’s dunk from a year ago, after which officials ended the game early as Dr Pepper bottles rained down on the court, remains a hot topic between fans from both schools.

“I’m sure a lot of people didn’t like it.” Sloan said. “I figure (if our fans) had been out there in that atmosphere and going through everything that was going on, they probably would have done the same thing. When you think about it, there’s really nothing else you can do (during a game) that wouldn’t get you in trouble. That was maybe the only thing I could have done that would have made me feel good and my teammates feel good without anybody getting in trouble.”

Hopefully, this year’s contest will be debris-free. It will certainly be worth price of admission.


photo above from Aggieland Illustrated--what a great shot
Posted by True Brown at 2:15 PM