So, Where Does It Rate? 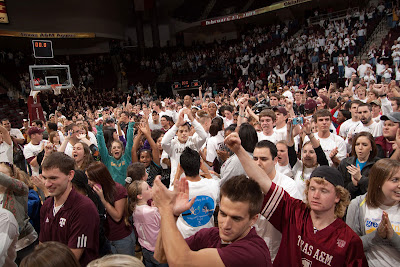 Last night’s monumental win by A&M over No. 2 Oklahoma begs the question: how does the landmark victory stack up in the Aggies’ all-time record book? “Best-Ever” lists are hard to compile, particularly when A&M’s flashes of success have come in such different times. So, to make this list, I only considered games played in the modern era, which for all intents and purposes began with Gary Blair’s arrival in College Station.

Previous teams captured some special victories (the 1994 team made the Sweet 16; the 1996 team beat ranked Texas and Texas Tech to win the SWC Tournament; and the 2002 team upended No. 5 Iowa State and No. 14 Texas) but I only looked at games since 2003-04 to compile this list.

HONORABLE MENTION:
No. 19 Texas A&M 60, No. 9 Baylor 52 (1/13/07)
The Aggies had lost 27 straight to ranked opponents heading into this Reed Arena showdown with top-10 Baylor. A&M rallied from an early 17-5 deficit to whip the crowd of 8,886 fans into a frenzy. After the game, Gary Blair told the media “it’s time for people to understand we’ve got a program here.” How right he was.

5) No. 14 Texas A&M 67, Texas 60 (2/28/07)
The stars lined up perfectly for the Aggies on the final night of the regular season—a home game against rival Texas, where an A&M win would clinch a conference crown. The Aggies didn’t play their best game of the year, but they played well enough to hold off the struggling Longhorns down the stretch. The post-game celebration was extra sweet, as coaches, players and even a few fans cut down the nets for the first time (and, to date, the only time) in Reed Arena history.

4) No. 12 A&M 57, No. 2 Oklahoma 56 (2/23/09)
Wait, so the Aggies just knocked off the highest-ranked opponent in school history, and the accomplishment doesn’t even make the top three? I struggled with placing this tremendous moment so low, but my caveat is that what happens the rest of the season could easily catapult this game much higher. When you consider the Aggies pulled this off with one of their main contributors in foul trouble and another with health (and foul) issues, it’s certainly a fair argument to say this is ranked too low. Takia Starks’ game-winning shot with five seconds left might go down as the greatest play in school history.

3) No. 3 Tennessee 53, No. 8 A&M 45 (4/1/08)
This game had more on the line than any other contest in program history, and it was a study in contrasting styles—the dean of women’s coaches in Pat Summitt and her dozen high-school All-Americans against Gary Blair and his band of unheralded scrappers. The Aggies more than held their own for the first 35 minutes of the game, cobbled together a five point lead late in the second half against the defending national champs. The much deeper and more talented Lady Vols eventually won and claimed another national title, but A&M won over a lot of fans and a ton of national credit with this Elite Eight near-miss.

2) No. 21 A&M 54, No. 6 Oklahoma 52 (1/27/07)
The fact that this is the only true road game on the list is what bumps it up to such a lofty perch. Oklahoma had finished a perfect 16-0 in league play the season before and was riding a 24-game league unbeaten streak. The Aggies battled the Sooners possession for possession and needed one last defensive stop to seal the win. Danielle Gant, playing in her home state, blocked a 3-pointer at the buzzer, stunning the 11,000-plus in the Noble Center and giving A&M its first road win over a ranked team since at least 1994. As an added bonus, the closing moments of the game were shown live inside Reed Arena, where a large crowd was awaiting the tip-off of an A&M men’s game. Pandemonium ensued inside Reed after Gant’s block, and the Aggies officially took their place at the Big 12’s head table.

1) No. 8 A&M 77, No. 9 Duke 63 (3/30/08)
Loud-talking Duke entered this Sweet 16 match-up against A&M with a touch of arrogance, as players told the media leading up to the game that they weren’t too worried about overcoming the Aggies’ high-pressure defense. Second-seeded A&M took control from the outset and never trailed past the three-minute mark in the first half. As it turned out, Duke’s offense was outclassed all night, and the Aggies ran away with the victory. For the first time ever, A&M was one win away from the Final Four.


Would you order these differently? Would you include different games in your top five? Should I have included last year’s Big 12 Tournament finals win against Oklahoma State? Post a comment or shoot me an email — true@12thmanfoundation.com — and let me know your thoughts.
Posted by True Brown at 12:40 PM