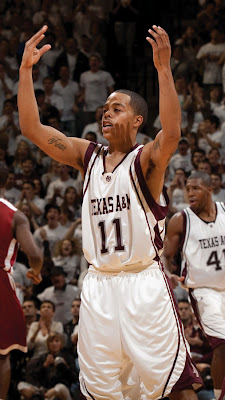 The pages devoted to B.J. Holmes in the Texas A&M men’s basketball media guide this season are filled with the essentials on the sophomore from Houston: his high school accolades, last year’s statistics, previous career highs in points, assists, rebounds and steals, and even a tidbit about his penchant for playing the piano and singing.

Nowhere, however, does it mention what may very well be one of his most unique talents—predicting the future.

The day before the Aggies played Texas Tech at Reed Arena on Jan. 28, Holmes made an ear-catching statement to a reporter.

“I think we are getting ready to explode,” proclaimed a confident Holmes.

The fact that A&M entered the match-up against the Red Raiders on the heels of a brutal 1-4 start to the Big 12 schedule left the reporter questioning Holmes’ prognostication skills.

Sure enough, the following night Holmes more than made good on his words.

With A&M facing an early 13-4 deficit, coach Mark Turgeon substituted Holmes into the game, and he quickly knocked down back-to-back 3-pointers. Later in the half, Holmes entered the game again with the Aggies down by three. Three possessions led to three more 3-pointers, with last giving A&M its first lead of the game. His final bomb of the night came in the second half, and the Aggies never trailed again.

After the dust had settled on the 79-70 win, Holmes finished his career night with a game-high 24 points on a smoking 6-of-7 from behind the arc. Indeed, Holmes’ fortune-telling ability may be about as exact as his pinpoint shooting accuracy.

In fact, the Aggies wouldn’t be charging toward an NCAA berth without Holmes’ recent contributions. He hit a big three-pointer late against Nebraska to help set up Josh Carter’s last-second bomb, and his seven-points-in-30-seconds in Colorado essentially erased a late eight-point Buffaloes’ lead.

The diminutive Holmes, listed officially as 6-feet but he admits it’s probably more like 5-10, has developed into a legitimate scoring threat for Turgeon’s team. He’s also seen his minutes increase exponentially after being relegated to the bench for most of 2008. Last year, Holmes barely averaged six minutes per game in spot duty. In Big 12 play this year, he’s logging around 20 minutes per night.

While he didn’t gain much playing time in 2008, he certainly took in some valuable lessons from some veteran players.

“Last year was kind of frustrating because of the (lack of) minutes,” said Holmes, who played his high school ball at Hastings High School in Houston. “But, I was able to learn a lot from Dominique (Kirk) and even Joe (Jones) in what it means to be a leader of the team. I took that into this year, knowing that I had to work harder in the offseason so I could get more minutes this year.

“I admired the fight that they had. Whatever was happening, whether we were up or down, they always had the same look in their eyes that they were ready to get even better. Dominique’s leadership—he directed everybody on the team. If somebody didn’t know what they were doing, he’d go over and talk to them. He didn’t yell at them, but he’d go tell them what they needed to do. I learned from Joe’s intensity, whether it was in practice or games, he was always very intense.”

Holmes hobbled out of the gates this year. He missed all six of his shots in the season-opener against Arkansas-Pine Bluff, and that was followed by another 0-fer against Stephen F. Austin. He made his first field goal of the season in the third game before hitting his stride against UNC Wilmington on Nov. 25. Holmes exploded for four 3-pointers against the Seahawks to set a new career high.

While those in the stands at Reed Arena that night might have been surprised to see Holmes get hot, his teammates and coaches certainly expected the shots to fall.

“Last year, he really didn’t get a chance to show what he can do,” said junior guard Donald Sloan. “We all knew he was a great shooter who can make plays, plus he’s a good finisher. Just him getting the opportunity (is the biggest difference this season). I’ve always known he could be a player, but this year, he’s getting that opportunity to make plays, and that’s helped him grow all year.”

As non-conference play progressed, Holmes played a vital role in two of the Aggies’ signature preseason wins. Against Arizona on Dec. 5, the Wildcats threatened to run A&M out of its own gym. But Holmes keyed they Aggies furious second-half comeback with three triples in the final 10 minutes of the game. His two free throws with 1:01 remaining pulled A&M to within two points and set the stage for teammate Nathan Walkup’s game-winning shot in the closing seconds.

Then, in a road game at Alabama, Holmes capped another big Aggie rally. His 3-pointer with two seconds on the clock forced overtime, where A&M escaped with an 86-78 win. 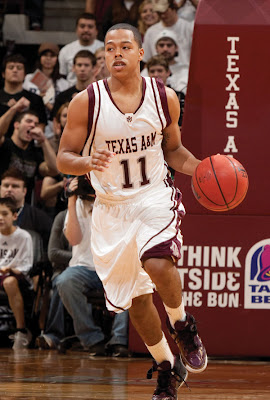 While Holmes has certainly hit some clutch shots this season, it’s his play on other areas on the floor that have drawn solid reviews from the Aggie coaching staff. Holmes is no longer a liability on defense, and his ability to serve as a stopper has helped him earn more minutes in the pressure cooker of conference play. Holmes’ sixth man role is more than just scoring, as he is second on the team in steals.

He’s managed to stay strong on defense against some stiff competition. Holmes was part of the A&M defensive corps that held Longhorn A.J. Abrams to nine points on 3-of-10 shooting earlier this season in Austin, and Oklahoma State guard James Anderson’s 3-point threats were mostly neutralized in the two match-ups between the Aggies and the Cowboys.

“B.J. is really helping us defensively,” said Turgeon. “He’s really playing with intelligence on both ends of the floor and he’s started to make some shots. When he does that, he’s pretty good for us. I’ll say this. All across this staff and all across with his teammates, we know B.J. is going to be in the right spot to do the right thing every time, and that’s good to have.”

Holmes said his defensive presence was improved greatly in the off-season. After weighing in at 180 pounds at the end of last year, Holmes decided to dedicate himself to shedding a few pounds. To accomplish that, he sought out longtime NBA player and coach John Lucas, who also worked with Holmes in his youth days. Holmes played with Lucas’ son, Jai, on the same AAU team in Houston, and the two have worked out together since the eighth grade.

As a result of Lucas’s tough workouts, Holmes checked in before the season at a more respectable 168 pounds. Carrying less weight has led to improved foot speed on defense and been a big factor to his success on that end of the court.

“Last year, (defense) was all new to me,” Holmes said. “I didn’t get the reps that I needed, but the more I’ve played, the better I’ve become. With Dominique graduating, I knew another guard would have to play, so I figured why not me? I’m feeling better about myself, moving faster, having more energy—(losing weight) helped that.”

Two of his quietest contributions to the team have come in other areas.

Holmes, who spent a majority of his time at point guard before coming to A&M, currently has the best assist-to-turnover ratio on the team. While his assist numbers aren’t as high as primary lead guards Donald Sloan or Dash Harris, Holmes has proven to be a good decision maker who can protect the basketball. In his first 505 minutes of play, Holmes had just 15 turnovers—much less than one per game.

He’s also helped the Aggies from the charity stripe. Holmes has made 83 percent of his free throws this season. As opposing defenses wise up to his jump shooting accuracy, A&M coaches want him to be able to drive the lane and try and draw fouls.

“(Other teams) are starting to realize about my shooting ability,” Holmes said. “I think it was in the Baylor game that I was about to get a pass and shoot, but when I turned the guy was right there in my face. I wasn’t used to that because defenses are usually so worried about Josh (Carter) and Sloan.”

Holmes never made it off the bench for the Aggies in last year’s tournament, but there’s little doubt that he would play a large role if the Aggies eventually earn a bid.

Holmes initially committed to A&M after being recruited by former head coach Billy Gillispie. After Turgeon was hired in the spring of 2007, he made one of his first recruiting pitches to Holmes, who was rated one of the top 20 players in Texas by Rivals.com. Other Houston natives Nathan Walkup and DeAndre Jordan were also members of Holmes’ signing class, and Turgeon’s words convinced the trio they had made the right decision in committing to the Aggies.

“The program was rising (when I signed),” Holmes recalled. “When coach Turgeon came, we all had some questions but he came to one of my practices and talked to me and my family. He reassured us all that things were going to be OK, and they have been.

“Me, Nate and DeAndre all talked about it and stuck with our decisions. We were so close, and I think that was a big reason why everybody stayed. I don’t know what (Turgeon) told the other guys, but he told me everyone would have a fair chance. That’s what I wanted to hear, and that nobody was going to be over anybody else.”

Turgeon has certainly proven to be a man of his word. Jordan played significantly last season before being drafted by the Los Angeles Clippers, and Walkup and Holmes have both hit big shots in key situations this year. And if he stays healthy, Holmes will have many more chances to make clutch plays—and maybe even a few more bold predictions.
Posted by True Brown at 8:36 AM