On And Off Track, Star Sprinter Shaped By Experiences 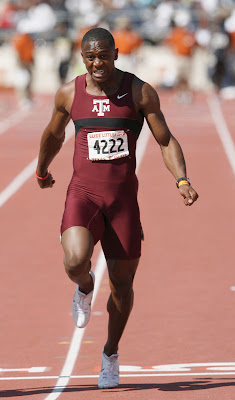 Gerald Phiri is an interesting case study in contrasts.

For instance, the easy-going sophomore resembles just about any other Texas A&M student when he quietly ambles across campus on his way to class. Phiri offers a quick smile and handshake when he meets a new face, but his soft voice is almost difficult to discern as he exchanges pleasantries.

It’s quite the contrast that with the flamboyant sprinter who confidently struts into the Gilliam Indoor Track Stadium before a meet. Phiri is loud, determined, brash and, more than anything, he exudes confidence. The mild-mannered young man from the previous day is long gone, and in his place is a finely tuned sprinter, readying himself to explode off the starting blocks.

While the differences in Phiri’s demeanor are certainly noticeable, so too are the differences in his cultural background. Phiri owns a travel log that dwarfs most classmates or competitors his age. Born in Ndola, Zambia, in 1988, Phiri’s family also lived in South Africa, Wales, England and Chicago before he arrived in College Station. Phiri’s father, Huggins, is a Pentecostal pastor, and the family often moved to accommodate Huggins’ evolving church duties.

“I don’t remember a lot of things (about Zambia),” recalled Phiri, pronounced “FEER-ee”). “Sometimes, somebody from Zambia will add me as a friend on Facebook and say we were good friends, so I remember some people. I loved South Africa. It was very much like the U.S.A. in the way people talk and the tall buildings and cities.

“(After that) We lived in a small town in Wales, (with a population of) maybe 3,000-4,000 people. There were only two other black families there, so it was a different experience. But I still have great friends there who I stay in contact with.”

It’s no surprise that old friends want to stay in contact with him.

Phiri, in his second year as a member of the A&M track and field team, is a seriously talented sprinter. He owns the five best marks in school history in the 60 meters (which is only contested during the indoor season). After setting the record with a time of 6.64 at the NCAA Indoors in 2008 to earn All-American honors, Phiri bettered the mark this season with a 6.59 clocking at the Texas A&M Showdown on Jan. 31.

Phiri was just as dominant during last year’s outdoor season. He picked up early-season wins against loaded fields at the FSU Relays and the Penn Relays while clocking a second-place finish at the prestigious Texas Relays in Austin. Phiri rolled through the conference meet, picking up gold medals in the 100, 200 and 4 x 100 relay. His stellar performance in the sprints made him the first male athlete in Big 12 history to win the 100 and 200 sprints in the same year, and it helped him earn men’s high-point award (22.5 points) and the conference’s Freshman of the Year honor.

Phiri’s record book should likely be even more impressive. He qualified for three events in the 2008 NCAA Outdoor meet, but was held out of the competition after sustaining an injury during the Midwest Regional, the final event before nationals.

To those who have known Phiri for a long time, his success probably isn’t a big surprise. He began competing at age 4, and it didn’t take long before Phiri was dominating the competition.

“In fifth grade, I ran a 12.49 in the 100 meters, which is what most people run in eighth grade,” Phiri said. “It’s a gift I’ve always had, and I’ve always worked hard to make sure that I could make it to where I am now.”

Recruiting Phiri was a no-brainer for A&M coach Pat Henry.

Phiri owned a well-established reputation and wasted no time making a national name for himself after his family moved to England. He quickly locked down his age group in the sprints, winning the national crown in his age group from 2003-06. Perhaps one of Phiri’s most impressive accomplishments came in 2005, when, at age 16, he finished fifth overall in the British Indoor Championships. He was the youngest sprinter in the final by three years.

“He is a good talent,” Henry said. “He’s done very well, but he’s young and is learning every time he gets on the track. We have to be pleased with how he’s done since he’s been here. He is very, very talented. (What he’s done indoors) is a good look at what he can do, but when you look at last year’s conference meet outdoors (when he won the 100 and 200)…as a freshman, that doesn’t happen.”

Another instance that rarely happens is finding a college student as well-spoken and experience-driven as Phiri. In fact, in this season’s media guide, Phiri noted that he came to College Station for “life changing experiences.”

For Phiri, who has experienced a multitude of cultures and nationalities, living in College Station has opened his eyes even more. Even the Texas slang—words like “howdy,” “y’all” and “fixin’ to”—were a new experience.

“It was kind of funny the first time I was in a class during my first semester,” Phiri said. “The professor came in and said “Howdy!” and about 300 people all shouted it back. I didn’t know what it was at first, but I have quickly joined in that.

The opening of the Gilliam Indoor Track Stadium inside the McFerrin Athletic Center has helped shape Phiri’s immediate future, as well. Prior to the facility’s ribbon cutting earlier this year, A&M track and field had not hosted a home meet in four-and-a-half years. Consequently, an entire class of Aggie athletes graduated without ever performing in front of a home crowd.

That will likely never be the case again.

A&M played host to five indoor meets from January-March, including both the Big 12 and NCAA championships.

Phiri, in particular, was grateful for the opportunity to compete in front of his fellow students. He’s done his part in telling classmates and people in the community about upcoming meets, and Phiri noted that even his barber has come out to watch him race.

Phiri’s parents now live in Frisco, Texas, and the new facility has allowed them to see their son compete for the first time in two-and-a-half years.

“That’s been the greatest thing about having this fantastic facility here,” Phiri said. “Last year, we were traveling to New York and Arkansas, and with my mother working and my brother having school, it was hard for them to fly away on Friday and back on a Sunday. They were able to come to three meets this year. I got them tickets right on the finish line. Every time I cross (the line), I can see them there…it’s been fantastic.”

The Gilliam Indoor Track Stadium has also given fans a chance to see just how impressive A&M’s athletes truly are. The 60 meter dash and 60 meter hurdles have become a fan favorite. Unlike some indoor track facilities, the sprint lanes at A&M are set up outside of the main competition oval, basically pressed up against the grandstands. That means some spectators are literally just feet away from the lanes when the competitors speed by.

In Phiri’s case, running also represents a way to express something very important to him: his faith. With a father who is a pastor, religion has played a large role throughout Phiri’s life. Phiri currently attends a non-denominational church in College Station, and he said he often finds his faith intertwined with his athletic endeavors.

“I believe I’ve been given a fantastic gift,” Phiri explained. “I feel it would be insulting if I did not use this gift to its fullest. To me, track is more about me showing people what God can do through me. I’ve learned to rely on God a lot. I always find that when my relationship with him is strongest, I perform at my best. I go through my Bible often, and it does help a lot when I read my Bible because it will relate to my everyday life and to my track.”

Phiri said one Bible verse he draws inspiration from is Philippians 4:13: “I can do all things through Christ who strengthens me.”