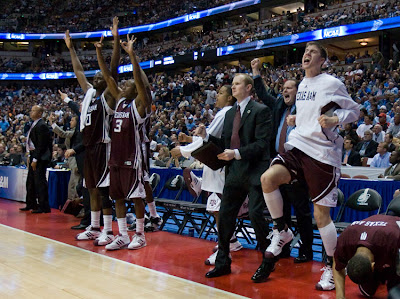 Say what you want about the first fall weekend at Kyle Field or the buzz at Olsen on opening day. More power to you if you get your kicks during a fantastic autumn evening at the Aggie Soccer Stadium, or if you live for catching some rays during a spring softball game or tennis match. It’s all good; no arguments here.

For my money, though, there is nothing like March Madness.

From the bracketologists who start predicting the 64-team field every week during conference play, to the drama of Selection Sunday, to the bonanza of games during the first weekend of the NCAA Tournament, nothing tops the month of March (and the first week of April, if your team makes the Final Four). It’s Christmas come early for a college sports junkie—the most intense, pressure-packed form of college athletics.

No other college sport dominates the headlines with its postseason tournament, and no other spectacle can compete with the emotion of a packed gym during a tight elimination game.

And our Aggies are right there in the middle of it.

The A&M men, a 9-seed, get underway Thursday at 11:30 a.m. against BYU in a rematch game from last year’s tournament. The women earned their second consecutive 2-seed and will open up Sunday against Evansville in South Bend, Ind., at 11 a.m.

(As an aside, if you’ve never been able to experience one of the Aggies’ NCAA Tournament games, please do yourself a favor and put it on your bucket list. There’s simply nothing like it. The suspense and importance of every shot, pass and rebound is immense, with the crowd sitting (and often standing) on edge throughout. It dwarfs the mid-to-late December snooze-a-thon that is football bowl season.)

Fans are usually the ones who get caught up in the drama of it all, but basketball coaches aren’t immune to the excitement this month often brings.

“It’s what March Madness is all about,” said A&M women’s coach Gary Blair, who coached the Aggies to a 25-7 record this year. “I love for people to go, because it’s a great experience. It’s excellent basketball. This is our time. It’s like baseball, when it gets to the playoffs and World Series—that’s baseball’s time.

And it’s a big deal when your team is playing in it. Just ask men’s coach Mark Turgeon. He played in four straight NCAA Tournaments during his days at Kansas, and he’s successfully guided A&M to its third and fourth straight trips to the Big Dance.

“It’s the music for the Tournament on TV; it’s the smell in the air; it’s how big every game is,” said Turgeon. “If you have any competitive spirit in you at all, it gets your juices flowing. I don’t sleep as much this time of year because I can’t wait for the next day to start. I love it; I always have. It’s a time to be grateful for what we get to be a part of. That’s what I try to tell our guys all the time. We’re so lucky to be doing what we’re doing.”

Many thought the Aggies’ string of three consecutive NCAA bids would come to end after Turgeon’s team sank to 3-7 in Big 12 play. But a magical run of six consecutive wins propelled A&M back into the tournament, making it one of just 16 schools to qualify for the last four NCAA fields.

Prior to this stretch, the Aggies had never made back-to-back appearances. When you consider that the women’s team is also making its fourth straight NCAA trip, these are special times in College Station.

“I hope fans here don’t take this for granted,” Turgeon said. “Just because we’ve been there four years in a row, people should be really excited of their men’s and women’s basketball programs and the things we’ve done. To lose the players we’ve lost over the years and continued to be an NCAA Tournament team says a lot about the kids in our program. I don’t want anyone to take this for granted, because there’s so much hard work to do what this group’s done and get where they are.”
Posted by True Brown at 1:47 PM