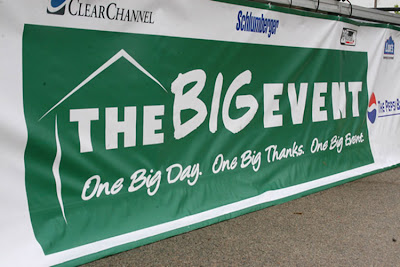 A record number of Texas A&M student-athletes, approximately 169, will participate in the Big Event on Saturday, Mar. 28.

The Big Event is the largest, one-day, student-run service project in the nation where the students of Texas A&M University come together to say ‘thank you’ to the residents of the Bryan and College Station communities. For the past 26 years, the Aggies have shown their appreciation by completing service projects such as yard work, window washing and painting for community members.

Every team not currently participating in athletic competition will be represented. Teams such as the Aggie men’s swimming and diving squad are competing in the NCAA Championships on campus this weekend and the women’s basketball team is in the Sweet 16 of the NCAA Championships in Trenton, NJ, while the Aggie baseball team hosts Kansas this weekend in a Big 12 series.

“We have had close to 100 student-athletes participate in this wonderful event in previous years, but this is a record year with 169 currently signed up,” siad Director of Athletics Bill Byrne. “What great young people we have willing to volunteer to assist in our community. I am very proud of all of those who are participating. I am especially pleased that Coach Mike Sherman and the Aggie football team have set aside practice to participate.”

Some other projects in the community include the Stuth household at 506 Dexter St. in College Station, the McNeill household at 2924 Cherry Creek Circle in Bryan, the Fritz household at 307 S. Haswell in Bryan and the Sparks household at 1500 Red Oak in Bryan.

Three Texas A&M football players, Cody Beyer, Roger Holland and Chevar Bryson, will be excused from participation in the Big Event as they have been selected to participate in the Football Physics program at the George Bush Presidential Library beginning at 10 a.m. and lasting until 3 p.m.
Posted by True Brown at 8:26 AM