Colson Is Instant Energy For Aggies 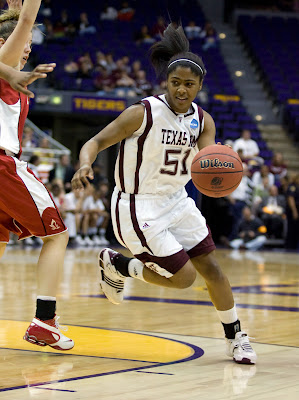 How could Sydney Colson, one of the highest-ranked recruits ever to sign with the Texas A&M women’s basketball program, be a valuable cog in the Aggies machine when she’s not even in the game? Surely, a player of Colson’s caliber and importance has to be on the floor as much as possible for A&M to remain one of the Big 12’s top teams.

According to A&M coach Gary Blair, that’s not necessarily the case.

Blair isn’t shy to point out that he doesn’t fret too much when Colson comes off the court. Certainly, he’d appreciate the luxury of the silky smooth playmaker from Houston remaining in the game as much as possible, but his point, rather, was that Colson still has a largely positive impact even if she’s not running the Aggies’ offense.

“How many times can a starter go to the bench after they’ve been playing poorly and still be a leader on the bench?” asked Blair. “She’s the most vocal kid we have on the bench. She energizes the whole floor.”

The engaging Colson certainly does that, both from the sidelines and when she’s on the court. Colson has appeared in every game this year, starting all but three, and she’s been a big-time reason the Aggies are in the midst of another deep run in the NCAA Tournament.

Consider the back-to-back games recently against Oklahoma and Kansas State as evidence for Colson’s contributions.

During A&M’s stirring 57-56 victory over No. 2 Oklahoma on Feb. 23, Colson played just 18 minutes and didn’t register a single point. Meanwhile, backup Sydney Carter, a freshman, tallied 11 points in 31 minutes. But after big shots or steals, Colson was the first Aggie off the bench to pump her fists, high-five her teammates or chest-bump Carter during a timeout.

Colson shined days later in Manhattan, Kansas, a place A&M had never previously won under Blair. She finished a perfect 4-for-4 from the field to chip in nine points during the Aggies’ road rout of then-No. 15 Kansas State.

Indeed, Colson helps make A&M tick no matter where she is.

“I love to see my team doing well,” Colson said. “If I come out of the game for not doing what the coaches want and (Carter) goes in and does well, that’s one of the most exciting things to me. I love to see her go in there and do well, just like she did against Oklahoma.

“I feel like with our energy on the bench, the girls on the court can see it and feel it. They’re not totally paying attention to the bench because they’re focused on the game, but we know when they’re (feeling it), especially on away games when we need that energy. That’s how we get our momentum, and that’s what can really get us going.”

A&M has certainly been up and going lately.

Even after losing last year’s program-changing senior class, the Aggies again finished in the upper crust of the Big 12. A&M rolled through the first two rounds of the NCAA Tournament and will battle Arizona State in the Sweet 16 on Sunday. Last season’s Elite Eight run remains the programs all-time benchmark (for now), but going a step further isn’t out of the question considering A&M’s talented players.

Colson, one of A&M’s most heralded recruits ever, is certainly one of them.

She spent her freshman year mostly out of the spotlight, as senior Aqua Franklin captained the Aggies in expert fashion. Franklin, a four-year starter, proved to be a valuable teacher to Colson, as well. Colson absorbed the way Franklin prepared for every game. She soaked in how Franklin interacted with teammates during practices and games, noting how the former Aggie captain knew where every player should be at every second of an offensive set. And when Franklin finished her final season with a career-best 173 assists to become one of A&M’s all-time best distributors, Colson was right there, observing every step of the way.

No matter the situation, Colson took it all in. 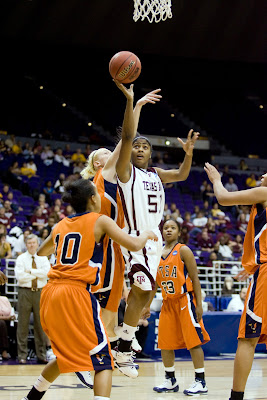 “She was a great vocal leader on the court, and the girls always respected her and looked up to her and listened to what she said,” recalled Colson. “She led the way for everyone, and that’s a big reason A&M ended up doing so well over the years. She would always pull me to the side if I was frustrated or didn’t know what coach Blair wanted. She knew the plays inside and out, she knew where people were supposed to be, and she knew what (Blair) wanted. It was awesome to have someone there who could be that calm and sensible voice for me that I could listen to and learn from.”

Having a mentor like Franklin proved to be important. Blair demands a lot from his point guard, and it’s the one position he recruits personally. Blair wants his lead guard to possess a total understanding of the team’s offense and even be able to think like the veteran coach.

Franklin didn’t have the luxury of playing behind a veteran starter. Instead, her first season was the year following star Toccara Williams’ graduation. By Franklin’s upperclassmen seasons, it was clear she had blossomed into a prototypical lead guard for Blair. This year, Colson is still going through the growing pains that come with leading the team—and excelling under Blair’s demanding eyes.

“Last year, I feel like I played more freely, because all the responsibility wasn’t on me,” Colson said. “I was just going in and playing my game. Now, I have to go in and know where everybody’s supposed to be, know what coach wants. I can either feel like there’s a lot of pressure on me, or I can step up to the plate and get the job done. That’s really what I want to do, and that’s really what I need to do. I need to develop that relationship with him like Aqua did, and get the job done.”

Considering the off-season injury Colson endured, it’s remarkable she’s performed as well as she has.

Team members were playing a game of pick-up basketball one early summer afternoon when Kiley Finstad stripped Colson of the ball near mid-court and raced to the basket for a layup. Colson, in an effort to make up for her mistake, raced back and leaped in an attempt to block Finstad’s shot. She came down awkwardly and tore the anterior cruciate ligament in her right knee.

The injury could have been devastating, both to A&M’s hopes in 2008-09 and to Colson personally. After all, according to Blair in this season’s media supplement, Colson was the player that A&M “couldn’t afford to lose.”

“I had never been seriously injured in my career (before the ACL),” Colson said. “The worst I had ever had was a twisted ankle or a busted lip. To have something torn…I was going through a lot emotionally.

Colson knew the team couldn’t risk her being out long and started rehabbing immediately. Just five months after surgery repaired her right knee, she took the floor for the Aggies’ season opener against Mercer. Colson logged eight minutes that night, hit her only three-point attempt of the game and dished out four assists with zero turnovers. Six days later, she made her first start of the year, and A&M picked up a road victory against Michigan.

“The most you ever improve is between your freshmen and sophomore years,” said Blair. “That was taken away from Sydney because of the injury this summer. She’s been making some mistakes, but she also makes a lot of things happen. She’s a true playmaker.”

Though she’s not quite back to 100 percent—she said 80 percent is more like it—Colson has been a mainstay in the lineup. She averages more than 20 minutes per game, shoots 40 percent from the field and has a positive assists-to-turnovers ratio. Colson’s man-to-man defense has improved as her knee strengthened, and she’s tallied four or more steals in a game six times this year. In fact, her 74 steals through 33 games is just one off the team lead.

The Aggies, meanwhile, have rallied from a tough early portion of their Big 12 schedule. A&M started 2-2 before winning nine of its next 11 contests. Included in those victories was a season sweep of Texas, a feat the Aggies have now accomplished in three of the past four seasons.

“I wanted to work hard,” said Colson. “I knew that I needed to be out there. (Carter) was coming in as a freshman, and I didn’t want to leave her out there and handle that responsibility alone. I knew it would be hard (for her), because it was hard for me last year…and I had Aqua with me.

“I also knew this would be my last chance to play out there with Takia (Starks), Danielle (Gant) and (La Toya) Micheaux being in their last year. I wanted to be a part of it with them on the court, not just sitting on the sidelines cheering.”

Although, as she’s proven this season, Colson is certainly effective from that vantage point, as well.
Posted by True Brown at 8:57 AM