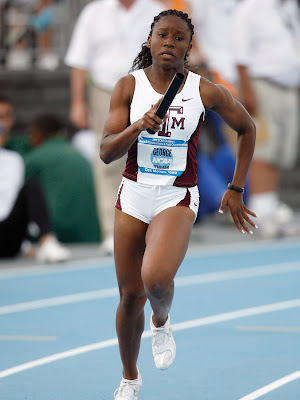 In between workouts at the Anderson Track & Field Complex and study sessions at the Nye Academic Center, Allison George can’t help but to sit back and reflect on how far her track career has brought her. All the comforts involved in being a track athlete at a major Division I school aren’t lost on George, a senior sprinter on the top-ranked Aggie women’s squad.

From the spacious Gilliam Indoor Track Stadium to the roomy Olympic Sports Training Room facility in the Little Athletic Complex to the team’s world class coaching staff, A&M’s track and field athletes are set up for success.

It’s certainly a far cry from where George was two short years ago.

George is a native of Grenada, an island of about 100,000 people located in the southern part of the Caribbean Sea. An accomplished athlete and the valedictorian of her high school class, George sought the opportunity to become the first in her family to enroll in college. Her quest landed her in Newark, N.J., where she earned a track scholarship to Essex County Junior College.

For a young woman accustomed to the beachy, tropical climate of Grenada, the chilly New England climate was quite a shock. So, too, was the living situation she was thrown into. Unlike a scholarship at A&M that pays for a variety of expenses, George’s scholarship to Essex covered only tuition and a place to live. As it turned out, that place to live didn’t come with just one or two roommates.

“It was a one-bedroom apartment with a bedroom, living room, bathroom and kitchen,” recalled George. “There were eight girls living there, all from different islands in the Caribbean.”

Imagine trying to live with seven complete strangers, even in a comfortable four-bedroom house, and you can imagine George’s dismay upon arriving at Essex.

“They never told us (before we got there) that it was going to be like that,” George said. “At first we thought it might not be that bad, but as time went by, girls always have their little arguments, so all that went on. It was really hard.”

Track practices turned out to be less than ideal, as well. George said Essex didn’t have a track on which the team could work out, so practices were held on a basketball court or along the city streets of Newark—even in the dead of winter.

Despite the less than ideal conditions, George performed well at Essex. She scored points at the NJCAA Championships in 2006 and 2007, including victories in the 400 (outdoor), 200 (indoor) and 55 (indoor).

In 2006, her freshman year, she also took notice of a very talented sprinter from Barton County Junior College named Simone Facey. Facey claimed three junior college national titles in 2007 before landing at Texas A&M, a school George had never heard of. George kept tabs on Facey the following year and watched as the sprinter excelled immediately in College Station. Facey finished her first year at A&M with six All-America honors while leading the Aggies to a then program best fourth place finish at the NCAA Outdoors.

“(Facey) came here and was that good, so I thought I could come here and the coaches could make me that much better, too,” George said. “She was the main reason that I wanted to come here. I had never really heard about the school. I was looking at her because she was such a good athlete. After I learned more about A&M, I never changed my mind.”

That fact that Essex and A&M share some recent ties helped George’s cause, as well. Former Aggie star Clora Williams came from Essex before winning the NCAA 400 meter title in 2006, and first-year A&M assistant Alleyne Francique—also a native of Grenada—attended Essex before he was a six-time All-American at LSU.

A&M coach Pat Henry liked what he saw in George, and it wasn’t long before she was a Texas-bound airplane. In particular, Henry liked George’s approach to academics, which can often be a red flag for coaches recruiting a junior college athlete to a major Division I program.

“You have to recruit those who have gone to a good enough institution to where they will have a good understanding of what it takes to be successful in the classroom,” Henry said. “The academic woes in front of a lot of young people today make it a situation where they have to go to a junior college first. It’s kind of like a stigma is put on the junior college kids that they can’t make it academically, but in fact, given the opportunity and going to the right place, they can be successful.”

George certainly believes she went to the right place. In addition to easing up her roommate situation, George said she was amazed by A&M’s seemingly vast resource pool to help student-athletes. Instead of dreading practice on the city streets, George excitedly anticipated working out on a full-size track.

Throw in tutors to help with schoolwork and a career center to assist in job advice and placement, and George was able to clearly see how Facey was able to succeed.

“There are so many people that are willing to help and that’s one of the things I saw when I came here to visit,” George said. “People are here just to help you, and if you use that, you’re able to succeed and know that you can get something done. I can be focused on that and not stressed out about what I’m going to eat today or what I’m going to do when I’m done with school. It makes a big difference.”

She set career best marks in the 100 and 200 at the Big 12 Outdoor Championships, but her biggest contribution came on one of A&M’s relay squads. At the NCAA Championships in Des Moines, Iowa, George teamed with Facey, Elizabeth Adeoti and Porscha Lucas to claim a national title in the 4 x 100. George anchored the relay, which finished in a blazing 42.59 seconds to set a school record and become the second-fastest relay team in NCAA history.

She struck gold again at the 2009 NCAA Indoor Championships in College Station. This time, she ran the leadoff leg in the 4 x 400. Teammates Sandy Wooten, Lucas and Jessica Beard followed George’s stellar opening leg. In the end, A&M won the race by a resounding 1.78 seconds margin to claim the program’s first-ever title at the NCAA Indoor meet.

Her individual time in the 200 last year was good enough to qualify for the Grenadian Olympic team. George, along with the nine-member Grenada delegation (which included Francique, who competed in the 400 and was the nation’s flag bearer) spent almost a month this summer in China. Months later, the experience is one that is still fresh in George’s mind.

She competed in the first two rounds of qualifying at the famed Bird’s Nest stadium, running against the likes of medalists Veronica Campbell-Brown, Allyson Felix and Kerron Stewart.

“I’ve been running in front of crowds for a while, but all those people—it was nerve-wracking,” George said. “For me, being on the track and being mentioned by the announcer (was my proudest moment). Not everyone would get recognized. They would introduce some runners but skip others, but I was one of the people who was called out. I was so excited because nobody knows who I am. It was an opportunity for the world to see who I am and know me. That was encouraging.”

George already has her eyes set on the 2012 Olympics in London, and Henry is confident she has the potential to become a two-time Olympian three-and-a-half years from now.

“Allison has good years in front of her,” Henry said. “She will continue to improve, and I think she’s one of those who will run at the next level after she is done here.”

Before that happens, though, George wants to see the Aggies lift the team championship trophy at this year’s NCAA Outdoors. George has already posted NCAA Regional qualifying times in the 100 and 200, as well as the 4 x 100 and 4 x 400 relays. At the Texas Relays in early April the 4 x 100 relay team sped to a collegiate leading time of 42.91, and the group followed that with a title at the prestigious Penn Relays in Philadelphia a few weeks later. The Aggies will likely be the favorite in that event at nationals, which conclude on June 12 in Fayetteville, Ark.

“Being a part of a winning team—and I know we are already a winning team—but being able to win a (national) championship is what I want,” George said. “I want an exciting finish, not a sad one where we regret something. I want us to come together and achieve what we’ve been working for.”
Posted by True Brown at 7:30 AM