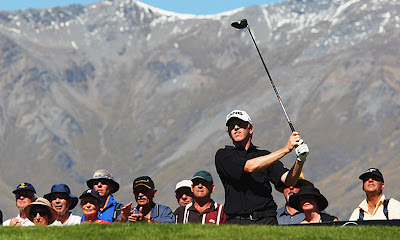 Martin Piller’s eyes brightened immediately as he pulled up to the first hole of a recent golf outing at Traditions Club in Bryan. Just off the tee box was the ‘Spirit of ’02’—the cannon fired after touchdowns at Kyle Field—and two members of the Parson’s Mounted Cavalry unit in full game-day attire.

A blast from the cannon was to serve as the official starting gun for a tournament benefiting a junior golf organization, and the former Texas A&M golf standout had returned to the area to take part. The event served as Piller’s first trip back to College Station in some time, and he excitedly reminisced to his playing partners about some of his fondest memories from his days in Aggieland.

Piller, who played for A&M from 2005-08, may not spend much time around College Station these days, but he is certainly making plenty of new memories traversing the links on the Nationwide Tour. The Nationwide Tour, which is operated by the PGA Tour, serves as the developmental circuit for players striving to earn a full-time spot on the PGA Tour.

Piller advanced all the way to the final stage of the PGA Tour’s Qualifying School last December before finishing 40th out of 161 participants. While he missed earning his PGA Tour card by a mere five shots, his finish was good enough to earn a full exemption on the Nationwide Tour.

So far this season, Piller has proven that he belongs.

The Duncanville native currently sits at No. 7 on the Nationwide money list—a very important ranking since the top 25 at the end of the year will earn a slot on the 2010 PGA Tour.

“It has always been a dream, something I talked about as a little kid,” said Piller recently from his hotel room in between rounds of the South Georgia Classic. “I could name a ton of guys who would trade spots with me and do anything to be where I am. I feel so fortunate because the chances of making it are so slim.”

They certainly are, particularly when you consider the annual Qualifying School consists of four separate stages, with the final stage being a six-round marathon. Simply making it that far is a monumental accomplishment, and last year’s field included nearly two dozen players who had won titles on the PGA Tour.

It was certainly a rapid rise for Piller, who struggled to find the lineup during his senior season with the Aggies. He played in 11 tournaments in 2007 but just five in 2008.

“He never played poorly (during our qualifying rounds), but other guys were beating him out,” recalled A&M coach J.T. Higgins. “He always seemed to be the sixth man or the next guy who would have qualified. He wanted to have a great senior season, but the more that happened, the more pressure he put on himself.”

As it turned out, however, that season’s struggles likely served as a turning point in Piller’s career. He has adapted a more relaxed approach to the game and began making a conscious effort to not take the trials and tribulations on the course so seriously. Instead of grinding through long pre-round practice sessions and agonizing over every decision on the course, Piller instead kept it simple and began playing with a more free-spirited attitude.

It has certainly paid off for Piller—literally.

His best finish to date is a second place in the New Zealand Open. After opening with solid rounds of 67-69-68, Piller found himself sleeping with the lead on Saturday night. He certainly didn’t play scared, despite crowds that exceeded 20,000 on Sunday. His final round included more birdies than pars (eight birdies to seven pars), and he finished with a 4-under 68. Unfortunately for Piller, fellow American Alex Prugh, who started one shot back, rattled off two eagles during a final-round 64 to claim the title by three shots.

Still, Piller earned a hefty $64,800 payday for his second-place finish. He also garnered some favor with the local fans after donning a newly purchased shirt for his walk up the 18th fairway.

“Earlier in the week, I bought a New Zealand All Blacks jersey—their national rugby team,” Piller said. “I wanted to show the crowd that I liked their country, and they loved it. I don’t want to be that golfer who is so focused and boring. Everybody likes the guy like (PGA Tour pro) Rocco Mediate, who is easy to talks to and shows a little personality.”

Piller’s friendly, easy-going personality plays well in front of a crowd, and so far the galleries have seen a lot of the budding professional. He made the cut in seven of his first eight tournaments, and he currently owns the tour’s eighth-best scoring average (70.40).

He also earned a sponsor’s exemption into this week’s PGA Tour Valero Texas Open, which starts Thursday at La Cantera in San Antonio.

All the while, Piller proudly tells anyone who asks where he went to college.

“I’m so proud when somebody asks me where I went to college,” said Piller, whose golf bag is adorned with A&M memorabilia, including an Ol’ Sarge head cover on his driver. “I always answer with the most pride and confidence.”

Not surprisingly, Piller does his best to keep up with the players on the Aggie golf team, and he jumps at every chance to return to campus.

“He is someone who is going to give back to this university for the rest of his life,” Higgins said. “He’s a great ambassador for Texas A&M, and the great thing is he’s just getting started. It’s just going to get bigger and better for him. He’s about as good a guy as you’re ever going to meet, so I’m really happy for his success.”


NOTES - Piller isn’t the only recent Aggie graduate to play in this week’s PGA Tour stop in San Antonio. Robert Gates (no relation to former A&M president despite the ironic name) won a spot in the field during a qualifier earlier this week. In fact, the two former teammates will tee off within moments of each other. In tomorrow’s first round, Gates tees off at 1:55, while Piller tees off in the following group at 2:05. Friday, the two tee off at 8:55 and 9:05, respectively…Piller has four top-25 finishes out of eight starts on the Nationwide Tour, and three of those have been top-10 efforts. The only Nationwide member with more top-25s is money leader Michael Sim, who has five…Gates has played in two tournaments on the Canadian Professional Golf Tour. He tallied a third-place effort in the Costa Rica Classic and a 10th place finish in the Corona Mazatlan Classic Mexican PGA Championship.
Posted by True Brown at 9:01 AM