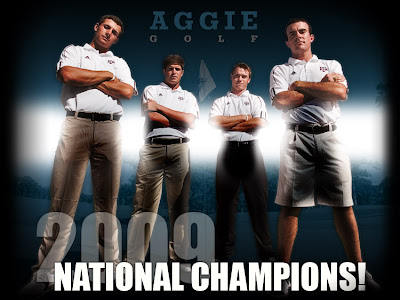 Congratulations to coach J.T. Higgins and the entire Aggie squad for what was a remarkable win at Inverness Club in Toledo, Ohio. After splitting the first four matches with Arkansas the pressure turned to senior Bronson Burgoon, who saw a 4-up lead turn into a tied match on the 18th hole.

Landry looked to be in control after he found the fairway off the 18th tee while Burgoon missed the fairway well to the right. After Landry's approach settled well short of the pin, Burgoon came up with the most clutch shot of his career. His ball landed on the green and fed down a slope, narrowly missing the hole and coming to rest just inches from the cup.

Landry missed his birdie putt to tie, and the celebration was on as the Aggie players mobbed Burgoon on the green. The title was the first ever for an Aggie golf team, and the first by any A&M squad since 1987.

We will have more coverage of this historic accomplishment in the coming days. Congratulations, again, to the 2009 NCAA Men's Golf National Champions!
Posted by True Brown at 12:20 PM